Oskar Eustis, renowned Artistic Director of the Public Theater in New York, extended a personal invitation to Rick Sperling, President and Founding Artistic Director of Mosaic, and the Mosaic Main Stage actors for a weeklong visit to the Public Theater with full access to the shows, the staff, and even the rehearsals! This invitation was offered to Mosaic on the heels of Mr. Eustis’ visit to Detroit earlier this year for Mosaic’s pre-show performance and open forum of The Tempest!

On the first day of this awesome experience, the young actors got to see Fun Home, the Tony Award winner for Best Musical, and they also received an opportunity to talk with performers in the audience line. One performer in particular was Joel Perez, who remembered when he performed in Detroit with the national tour of In the Heights. Joel told the young artists what an impact Mosaic had on him; an experience that was talked about for months! Michael Cerveris, two-time Tony winner, generously spent 20 minutes between shows to share powerful insights and advice with the young artists! This day started and also ended on a high note with the exciting experience of seeing one of the top experimental theater companies, Elevator Repair Service, perform the play The Sound and the Fury. The young artists were guests of Oskar Eustis and received a talk-back with the cast after the show, with one of the actors saying, “I have heard about Mosaic — my in-laws live in Detroit and they rave about you guys!” 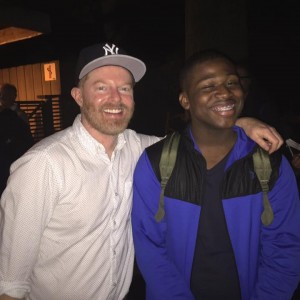 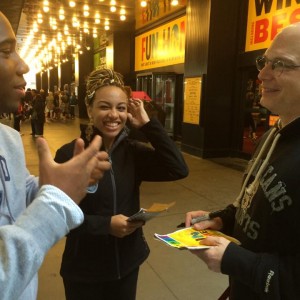 Left, Michael Cerveris and the young artists. Right, Jesse Tyler Ferguson with one of the actors.

On Mosaic’s second day of this Public Theater ~ NY Experience, the young actors had a talk-back with professional actor Kelly AuCoin(The Americans). Kelly had an extensive conversation with the young artists about “the life of an actor in New York.” This resonated with the young actors, as they were able to hear about the world of acting from a real-world perspective. Later in the evening, the young actors went to Central Park’s outdoor Delacorte Theater to see The Tempest with an amazing cast, featuring Jessie Tyler Ferguson(Modern Family) and Sam Waterson (Law & Order). With anticipation, the young actors waited by the stage door to meet them and were able to take pictures with professional actors who played the same roles they had played in Mosaic’s performance of Public Theater’s musical adaptation of The Tempest in Detroit! Some of the professional actors stayed a long time and were excited to talk to the young Mosaic actors. One of the actors, Nicholas Christopher, also remembered Mosaic from being on the In the Heights tour! 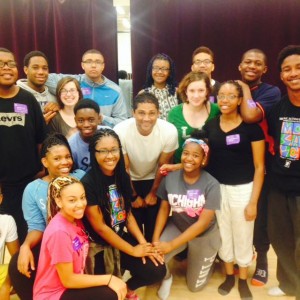 On the third day of their NY Experience, the young actors had the awesome opportunity to tour the NYU campus and have discussions with the admission folks about Tisch School of the Arts. The professor told the young actors that because they were in Mosaic, they had an advantage over others applying to Tisch and other schools around the country. “People know Mosaic and it really means something,” he said. After hearing what it takes for entry into one of the top schools in the nation (one with tough admissions criteria), the young actors went on to experience a theater movement master class with a NYU Tisch professor and a monologue workshop with professional acting coach Renae Baker, who has coached countless Broadway and television child/teen actors! The exhilarating day didn’t stop there; Mr. Eustis had the young actors as his special guests to see 39 STEPS Off-Broadway, a slapstick retelling of an Alfred Hitchcock film by only four actors. After the show, the young artists were once again afforded a talk with the lead actors, who shared great advice! 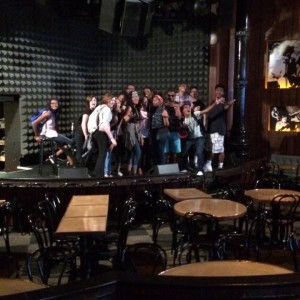 The fourth and final day was spent at the Public Theater! The young actors received a tour of the Public Theater building, saw where the sets were built, and talked with the production folks! They had a meeting in the Public Theater’s boardroom with one of the Public’s Casting Associates, who shared details on the casting process — how they find and choose actors. From there, the young actors had the incredible honor of being able to watch a professional theater rehearsal of Cymbeline, the next show to play in Central Park after The Tempest. They observed acclaimed actors Hamish Linklater and Lillie Rabe prepare to perform the lead roles!

Mosaic is so very proud of its Alumni, and what a delight is was to have the opportunity to spend time with one of our Alumni during this transformational experience! Celia Keenan-Bolger, three-time Tony Award nominee and Mosaic Alum, invited the young actors into her home, where they sat on her living room floor while she and her husband – also a Broadway actor – talked candidly about how she went from Detroit to Broadway! The Bolgers are new parents, but they did not hesitate to invite the young actors into their home and take the time (with baby in tow) to share their experience.

Mosaic spent the evening of this awesome day as guests of Mr. Eustis at the Tony-award-winning play, The Curious Incident of the Dog in the Nightime; then they returned to the Public Theater to see an improvisational rap show called Freestyle Love Supreme at Joe’s Pub, The Public’s Cabaret space. The performers brought David Johnson onstage (it was his birthday), and they acted out — in rap and music — his day! After the show, the performers once again were excited to talk to the Mosaic young artists and give them advice. One performer, who was especially passionate about encouraging the young actors, was James Monroe Iglehart, a famous African-American musical theater star who won a Tony Award in 2014 for his role as the Genie in Aladdin.

Sharing with you another Unforgettable Experience!
Thank you for your continued support

of Mosaic Youth Theatre of Detroit!

WITHOUT YOU THERE IS NO US!

You might also like
One of the following
DeLashea Strawder Talks About Mosaic Youth Theatre of Detroit’s Latest Show, Mwindo
Nonprofit Core Values, Envisioned Futures, and Leading Forward, Featuring Delashea Strawder on The Nonprofit MBA Podcast
Representation & the Importance of Black Stories

Login to Mosaic Youth Theatre of Detroit
Reset Password
Enter the username or e-mail you used in your profile. A password reset link will be sent to you by email.