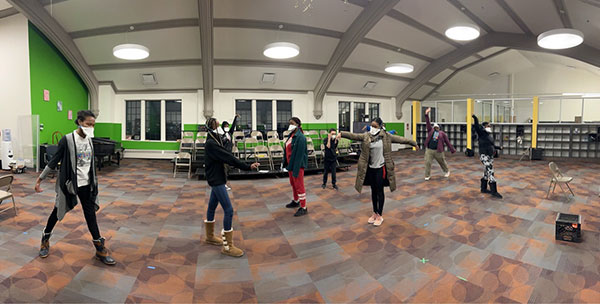 Nadia, a student at Southfield Christian, told me a little about how she’s been thinking about Black history month. Instead of something we focus on only one month a year, or only tell certain perspectives of, she thinks it’s important to recognize that Black history is everyone’s history. It’s something we should be actively learning every day.

“In history class, the only time I hear about Black people it’s either slavery or Martin Luther “ King, and though those are very prominent times of Black history, it’s not the whole story,” she told me during our conversation. She brought up Black people’s role in the jazz era as one example, focusing on the fact that “when we only focus on those two points you get a really warped narrative that we’re only victims.”

Instead of focusing on only the past, the young artists at mosaic are excited to leverage Black History month to challenge all of us to recognize that Black history is being made every day. That we are all a part of Black history every day that we wake up. It isn’t confined to one chapter in a history book, or one month in the year, and it definitely isn’t stuck in one moment in time.

Nadia says that representation is just one way that we can continue honoring those who came before us, even when it isn’t Black History Month.

“I feel as though using art to encourage those who may be coming from other backgrounds who look like me that they matter and have the power to succeed and rise above expectations is important,” she told me.

It’s important for Nadia to use the resources that she does have, and to make sure that she represents “the people who look like her” in every space that she’s in. That’s just one of the ways that she finds a way to use her gift.

“Having the opportunity to do that {encourage others] with my voice is impactful, mainly because not everyone has access to the resources that I do.”

If I learned anything from Nadia, it’s that Black history month is way more nuanced than we used to think about it. And that’s okay–relieving even–because it means that it still matters. And that students are still demanding to show up and be seen and heard when it comes to their Blackness.

Imani Harris is a 2018 alumna of the Mosaic Singers. She is currently finishing her Journalism and African American studies degrees at Northwestern University. Imani is passionate about using her voice and knowledge to share Black stories, and especially to support and illuminate all the beauty that exists in the Black community.

You might also like
One of the following
DeLashea Strawder Talks About Mosaic Youth Theatre of Detroit’s Latest Show, Mwindo
Nonprofit Core Values, Envisioned Futures, and Leading Forward, Featuring Delashea Strawder on The Nonprofit MBA Podcast
Representation & the Importance of Black Stories

We Are the Celebration

Login to Mosaic Youth Theatre of Detroit
Reset Password
Enter the username or e-mail you used in your profile. A password reset link will be sent to you by email.